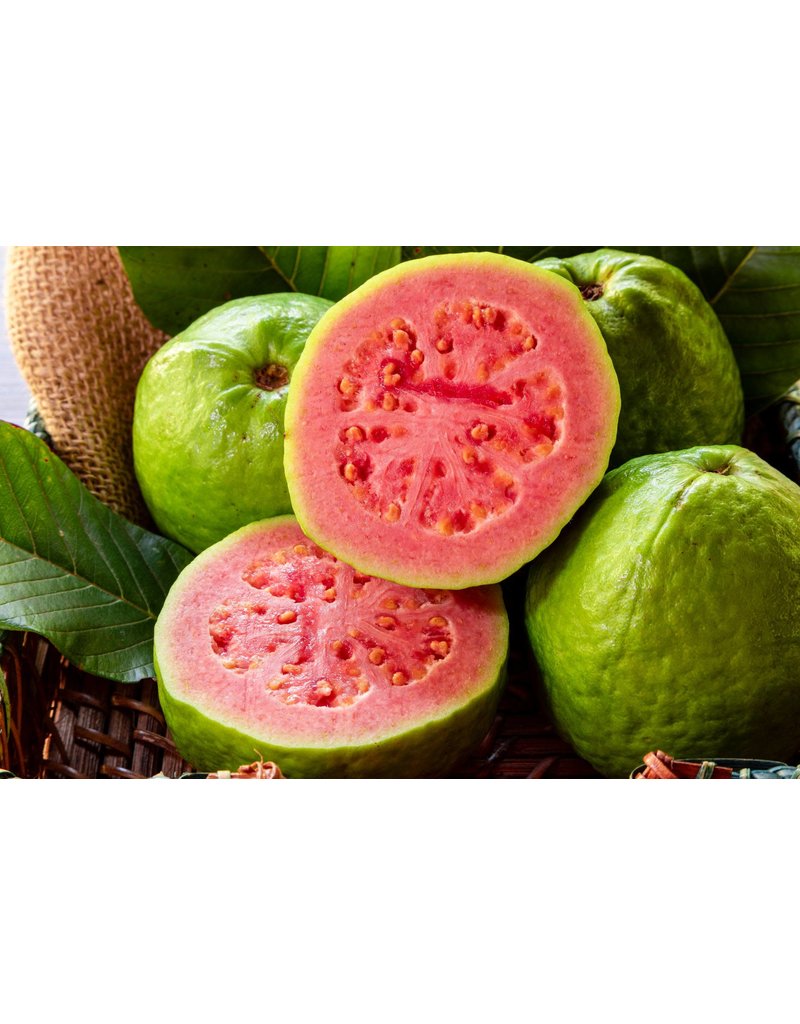 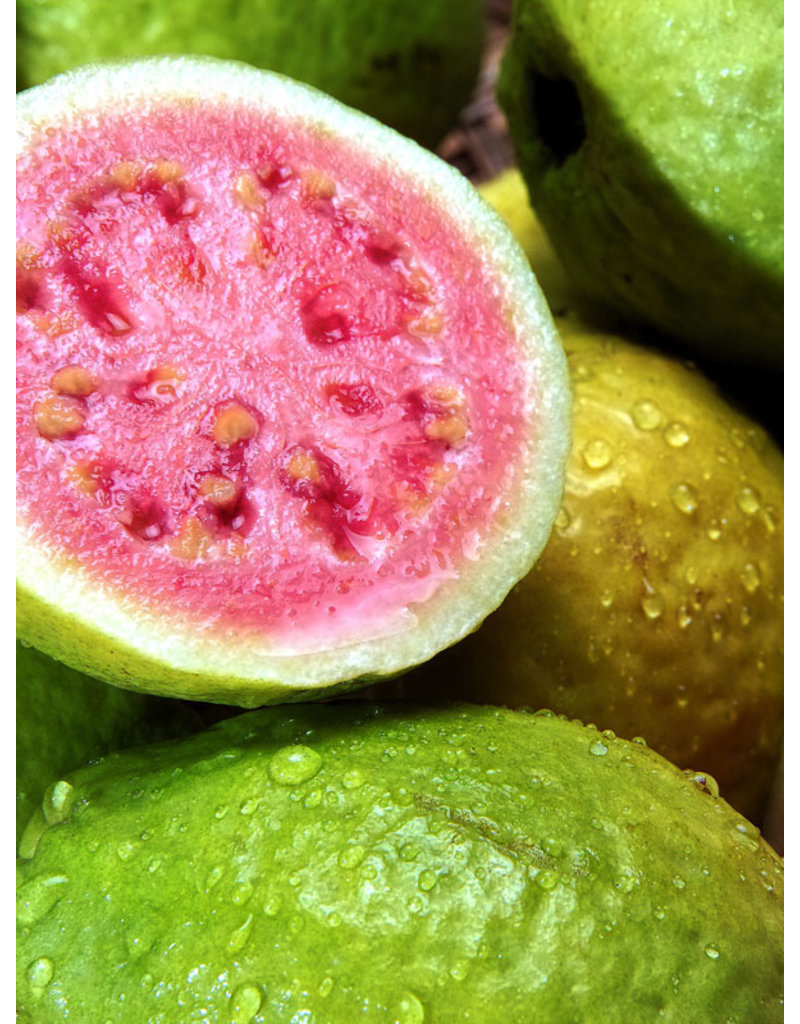 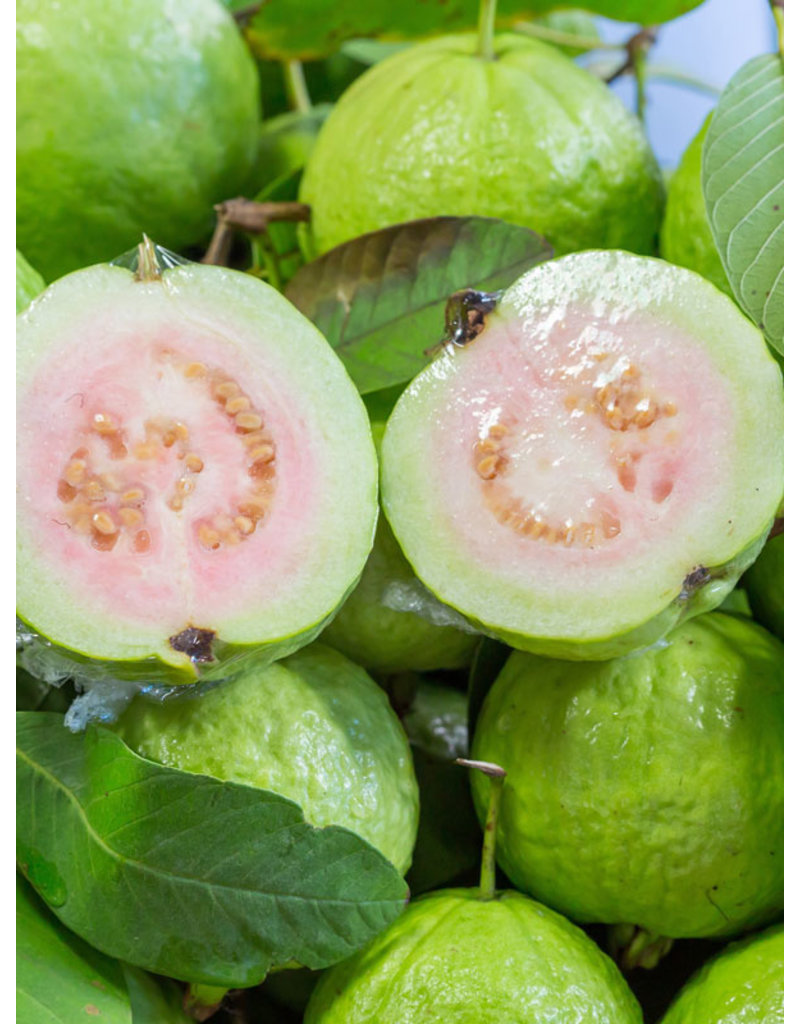 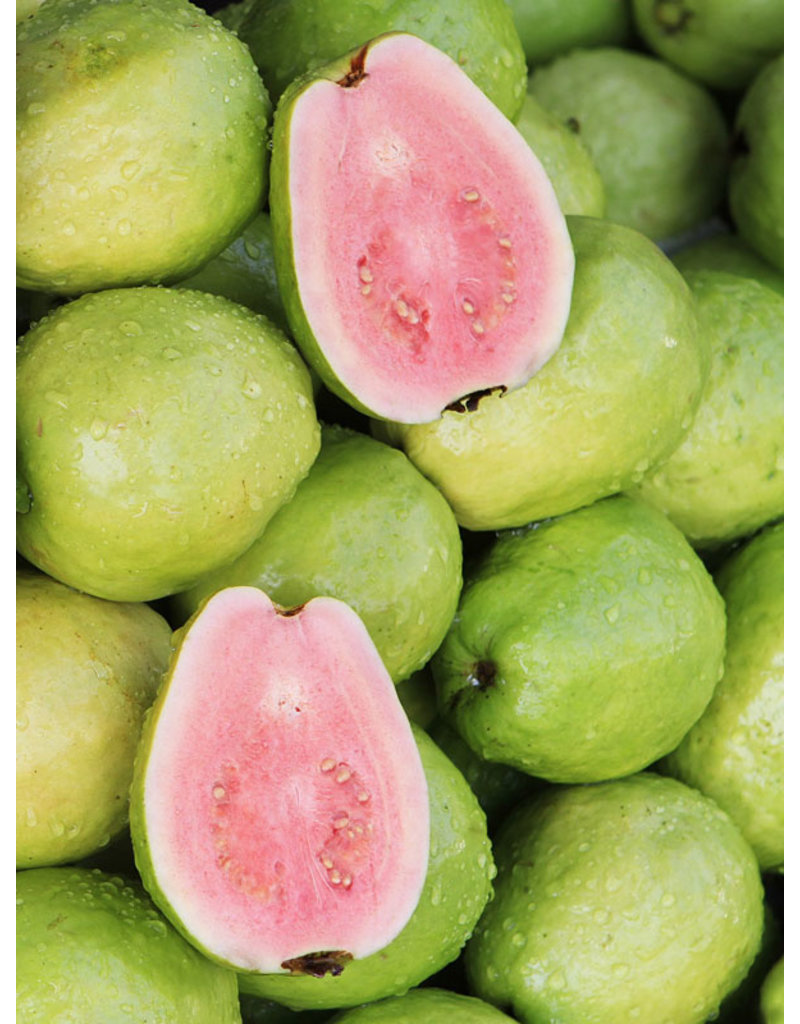 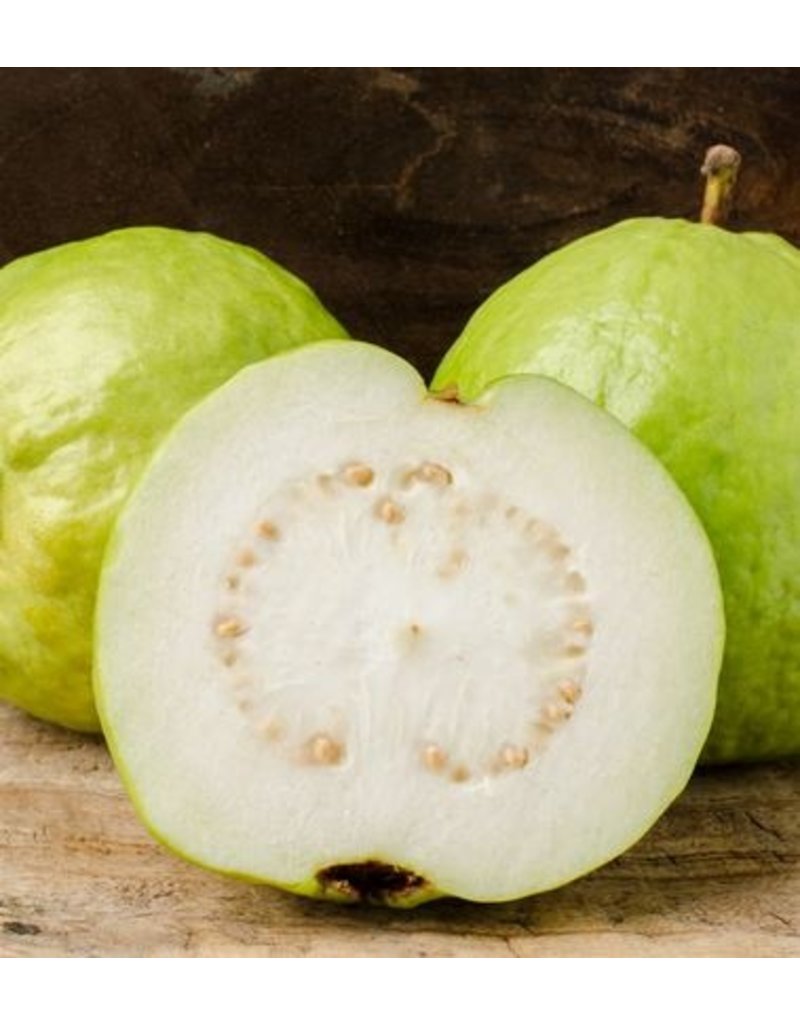 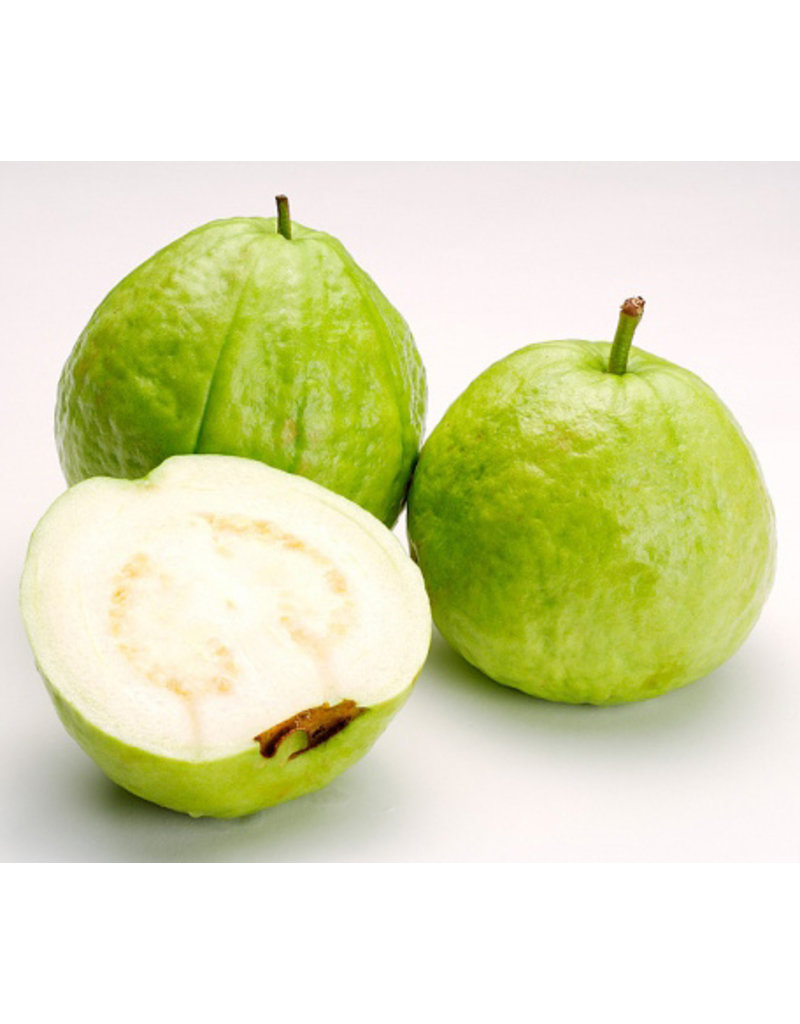 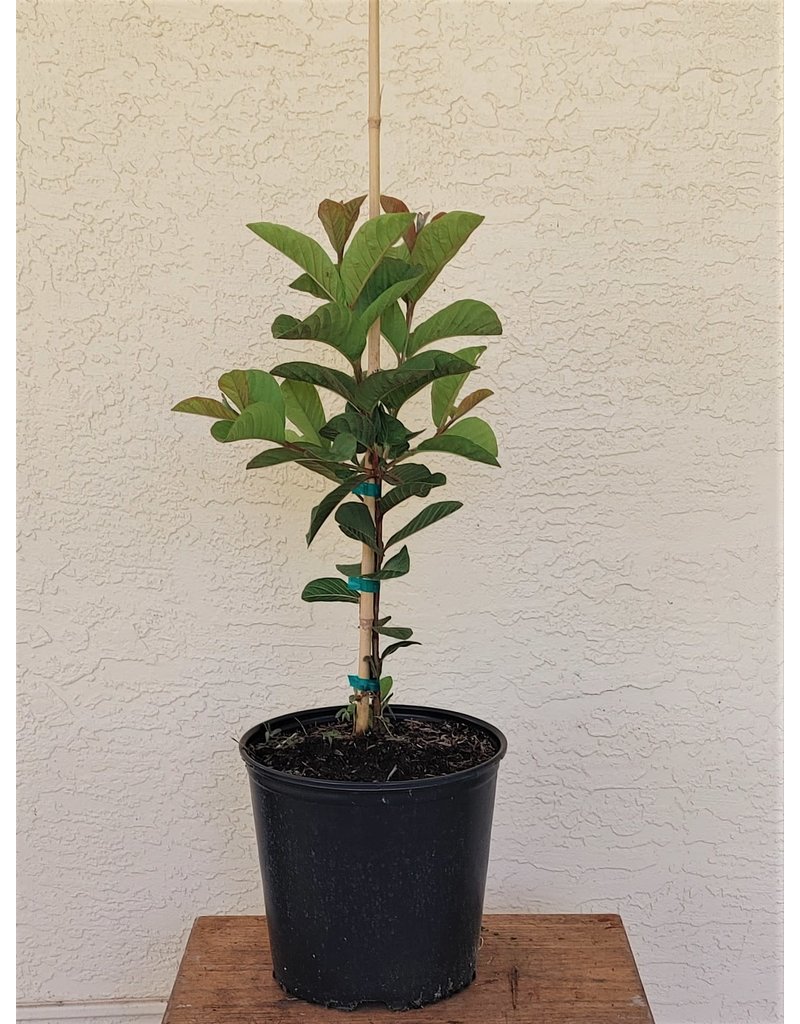 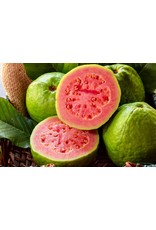 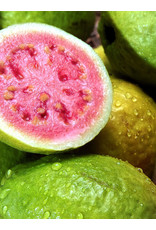 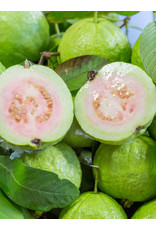 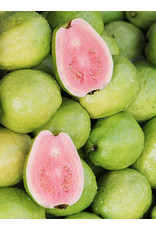 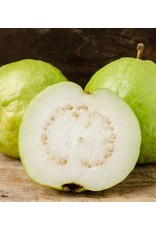 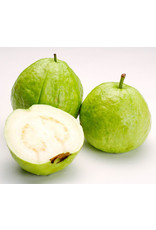 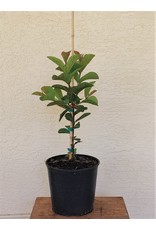 Tree Description: Guava is enjoyed in jelly, juice, pastries and a multitude of other recipes. The fruit can be round to pear shaped, and they are typically about the size of a baseball. The pulp is smooth, sweet and extremely aromatic. The trees are heavy producers, and will begin fruiting at just one year of age. Avg. Height x Width: 15' x 15'. Season: Year round. Damage Temp: 25 - 26 F.

Distribution: Today, the fruit can be found growing in more than fifty countries throughout the tropics and subtropics, including some of the Mediterranean areas. In Europe, guava is grown is Spain, Portugal, Southern France, and Israel. In the United States, guava can be found in California, Florida, and Hawaii.

History: Archaeological evidence shows that guavas were in use in Peru by around 800 BCE. It was in Peru that they were likely domesticated, but they quickly spread through South and Central America. By about 200 BCE they had reached as far north as Mexico, and from there spread to the Caribbean islands. Today the main producers of guava are Brazil and Hawaii.

Importance: Traditionally, the guava was used as both a food and a medicine. It has a great many properties that make it useful in treating various illnesses. It has been used to treat diarrhea, infections, dental problems, heart problems, allergies, and even has anti-hyperglycemic qualitie.The bark is used in Central America for tanning hides. Malayans use the leaves with other plant materials to make a black dye for silk. In southeast Asia, the leaves are employed to give a black color to cotton; and in Indonesia, they serve to dye matting.